Ok, we’re going to talk about numbers with enough charts and graphs to satisfy even Justin McElroy.  The topic is local government taxes and service fees.

Provincial government gives municipalities the right to get the money they need by taxing property owners and charging for services, mainly fees for sewer, water etc..

They are not supposed borrow for operating costs, so spending is limited to what they charge for services plus what they collect in tax from property owners.

The tax rate is simply an annual calculation where the money they need is divided by the value of all taxable property. That number, times your property value, is what you owe in tax that year.

The rate is typically less than one percent. It represents how much of a community’s visible wealth has to be taken to cover the government’s costs for the year. It is a regressive wealth tax. In 2022 New Westminster charged 0.2% while West Vancouver charged 0.15%.

The utility service fees are set by taking the annual cost, including depreciation, of the system your home is hooked into and dividing it into the number of users. Sometimes there are meters to provide incentives for conservation, but the principle is users overall pay for the system they are connected to.

Until about ten years ago, the City and District of North Van kept their tax rates similar. For the last ten years or so, the City has had to increase the property tax rate faster on average than the District. The City is the heart of the North Vancouver community and the pressure to provide services and facilities is inevitably greater in the heart of a community than it is in the suburban areas.

In the explanation the City provides with its tax notice, it hides the higher tax rate behind lower utility fees and tries to say that the fact taxes and fees together are lower than the District, that taxes are lower. This is disingenuous. Taxes go to the government. Utility fees are to pay for the system your home is connected to. It is misleading to combine them and call it ‘total taxes’.

If the City and District governments were ever to be combined, simple math tells you the new combined rate would be lower than the current City tax rate and higher, not by as much, than the current District rate. There is no logical reason for utilities to change at all. Homes would still be attached to the same pipes in the same service area.

All the numbers from population to tax rates, expenditures, average house prices for all 161 local governments (100 Mile House to Zeballos) can be found at the BC Government’s website for Local Government Statistics.

Here are the residential tax rates for the City and District of North Vancouver:

Let’s agree that the red number (City rate) is higher than the blue (District rate) one and not try to say that taxes are lower in the City.  The City finance department has in the past pointed to the Taxes on an Average House figure, but that is trying to make a virtue out of being poorer.

Here is how the City tax rate has fluctuated in comparison to the District rate over the last 15 years: 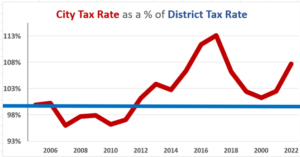 Here are tax rates for other MetroVancouver municipalities and the trend of the City and District: 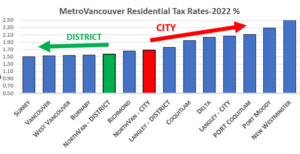 Finally, this is a graph straight out of the District’s 2021 Annual Report showing the average increase over 10 years of all Metro Vancouver municipalities: 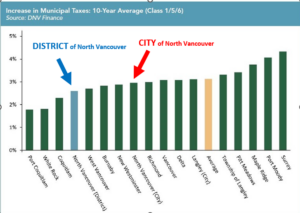 Did you know any of this before? Do you think the way the City presents its tax information is just a bit misleading and self-serving? I do. If elected I will represent you to the government, not the other way around.  I will do my best to make sure what they report to you is clear and not self-serving.

Given all the things the City is doing, what do you think will happen in the future?

The City is building the Harry Jerome Recreation Centre, a project bigger than anything it has done before. A developer that was supposed to share the risk is already selling condos on the site and the City still has 100% of the risk of a major construction project that the City decided to break ground on during a global supply chain crisis and increasing inflation.  It is selling density (the right to build high rises higher) everywhere to build up reserves because it knows the cost will be a lot more than the budget. It is certainly not thinking about whether that will make the gridlock across the North Shore even worse.

The City government is not working for the people who live here now. Vote for Change on October 15th!

Donate to my Campaign
share
0 Comments Leave A Reply