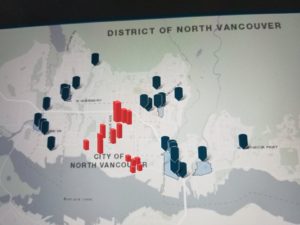 The blue boxes represent major developments in the District, the red ones in the City. All of them will put more cars and people on the same already crowded roads and in the same overstuffed buses. We need to look at the big picture and make sure it all fits.

City and District planning departments don’t consider the cumulative effects on traffic of the projects they approve. And they don’t get together to assess the impact on North Van as a whole.

Developers just want their individual projects approved as fast as possible before the community wakes up and says enough is enough and pushes back on all development, good or bad.

We have to get serious about making decisions about development in the City before we end up in a situation where public frustration with the apparent lack of coordinated planning and development of the infrastructure needed to support growth results in an angry rejection of all development.

The first step to doing that is thinking carefully about whom you vote for in the election on October 20th.

Your vote for Guy Heywood for Mayor is a vote for common sense at City Hall.

Donate to my Campaign
share
6 Comments Leave A Reply

The trouble with Harry (Jerome)

Why City taxpayers pay more for policing than the District.